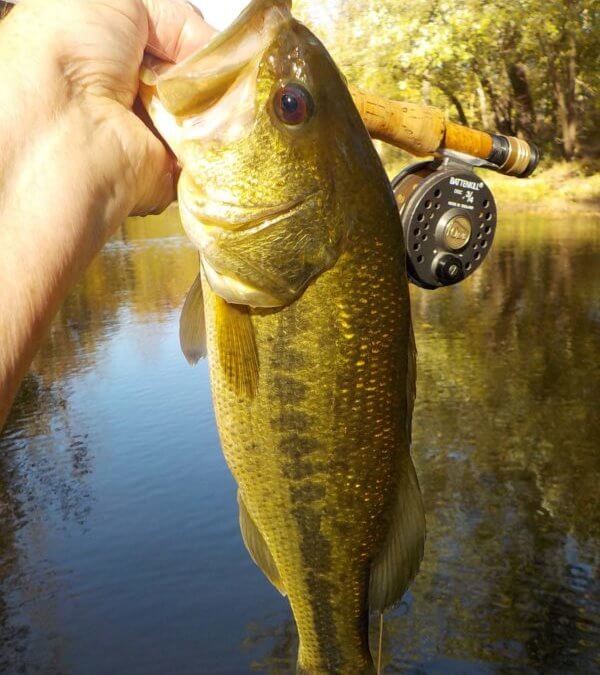 A blue sky enabled deep sunlight penetration into the clear pools of my chosen stream. Casting practice would be the only benefit of fishing then, so I reclined on a streamside log and waited for the west side bluff to cast its shadow over the fish-holding structure. The observation time revealed a caddis hatch that prompted me to remove the small streamer I had chosen to begin fishing and knot a size-10 soft hackle to the business end of my 3-weight setup. I hoped that sizeable bluegills would be feeding on the caddis larva as they rose to the surface to hatch. Gentle casts to the extended branches of a deadfall were counted into the deepest pocket and slowly stripped. Eleven chunky bluegills were coaxed from the site before repositioning. Two branches extending at right angles created a perfect ambush location, but four casts there were ignored. On the fifth presentation, the countdown was extended from 5 to 8. Upon fly activation, a gentle tug was soul-satisfying, but as the rod was lifted into a hookset, it was apparent this fish was larger than the others. My 8 1/2 3–weight had a deep bend that created doubt about the light tippet I’d chosen. A foamy spray sent rivulets of silver across the surface that removed any doubt that a hefty largemouth had intercepted the fly. Two strong surges toward the protection of the deadfall were halted by palming the reel spool. A run into deeper water accompanied by a series of head shakes were subdued before a circular tug of war ended by lipping the 16-inch fish. When snow is blowing against the window beside my tying bench, I will cherish the memory of that bass.