A Case of Disappearing Bluegills 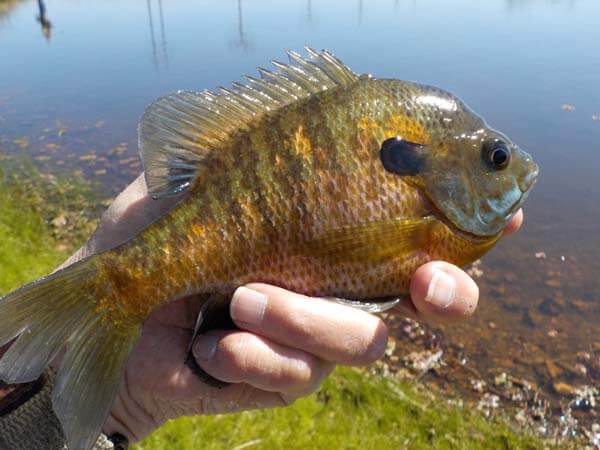 Did the last visit to your favorite pond leave you wondering why the big bluegills had disappeared? Despite your recent lack of success they’re still there and not on a hunger strike; they’ve just relocated in deeper water. Here’s how to find them and rekindle those beautiful vibrations you cherished when they were in the shallows.

Many anglers associate even large bluegills with shallow water.  Certainly, they locate there for an extended period during their initial spring spawn and again for brief feeding forays during twice daily migrations in the summer and autumn seasons, but that leaves a high percentage of their lives spent elsewhere.  To know more precisely where anglers need to fish they must first understand why the bluegills vacated the shallows. Depth provides comfort both in terms of body temperature and avoidance of direct sunlight.  Lacking eyelids their exposure to sunlight is the human equivalent of staring into the sun.

While able to withstand a wide range of water temperatures bluegills, as cold-blooded creatures, are most comfortable between 75 and 85 degrees.  This provides us with a clue concerning their deep-water hideouts, but even more importantly we need to assess the depth of sunlight penetration.  In weedy environments sunlight penetration is the depth from which the weedline grows.  That depth can vary greatly from one body of water to another depending upon the clarity of the water.  It may be but a couple of feet in turbid or stained water but 20 feet or more in a very clear environment.

Even with these parameters we still have a wide array of possible bluegill locations.  If the water contains a lot of structure such as brush piles, submerged stumps, rock piles or humps, and depressions the task of locating the large bluegills is simplified.  By checking water temperatures at various depths and understanding the depth of weed growth we can seek structure at those depths.  But most ponds aren’t rich in subsurface anomalies capable of holding fish.  Many have even had their bottom character erased by piles of silt that has covered the contours and structure over the years.  These ponds have, in effect, become “fish bowls” that are vacant of structure.  This complicates the process of locating deep-water bluegills, but fortunately most of these silted ponds are smaller than their well-structured counterparts.

Large bluegills often suspend over deep water even in structurally diverse lakes.  Sometimes this is simply a matter of convenience.  A lengthy migration to structure is rejected in deference to suspending over deep water near the shallow feeding flats.  In “fish bowl” waters suspension is the only available option. At times bluegills suspend surprisingly shallow over deep water. For example they may be located only 3 feet deep over a 28-foot bottom, but they might also suspend at 26 feet off that same bottom or anyplace in between. The difference is primarily related to sunlight penetration.  Exceptionally overcast skies will find fish locating higher in the water column but only if a comfortable water temperature can be found at that depth. Further inducement to locate there can be a feeding opportunity such as nymphs rising to the surface or a nearby pod of minnows.  Bright penetrating sunlight, on the other hand, will force the bluegills to locate much deeper.

The easiest method of determining the location of suspended bluegills is accomplished with a fish locator.  While some small crafts, including float tubes, are outfitted with locators, most are not.  The other anglers must rely on trolling, controlled-drifting or random-casting to present flies at various depths over the entire deep water section of the pond to locate the fish.  This leaves shorebound anglers at a bit of a disadvantage if they are unable to cast to the entire area of the pond.

Whether you are able to navigate the waterway or confined to the bank, two presentation options will aid the search. First, sinking lines, whether sink-tip, full-sinking or intermediate line with a slow, uniform sink rate can be counted down to various depths until the search is completed.  The other option involves exploring various set depths by utilizing either a strike indicator or a conventional slip bobber.  Since these suspended fish are not actively feeding they are not inclined to chase a meal but will feed opportunistically. This recommends the use of a strike detection method.

Presentation success, whether trolling, drifting or still-fishing, is largely dependent upon whether the bluegills are tightly or loosely schooled.  Again a locator makes this determination easy but trial and error is the lone method for most.  If the fish are loosely schooled they will be easier to locate because they will occupy a larger area.  Remember the comfort factor in their suspension.  All of the school will locate at the same or nearly the same depth to experience the same level of comfort.  Bluegills tend to school loosely in times of stable weather, as indicated by a rising or stable barometer, and when they are undisturbed by predators.  Tightly schooled bluegills band closer together during a rapidly falling barometer or when they have been frightened.  The tightly schooled fish are more difficult to locate because they occupy a smaller area, but once found the fly fisher may be able to induce them to feed competitively by enabling hooked fish to fight amongst their buddies.  Often in this situation, another bluegill or perhaps several can be seen following the hooked specimen.  They can also be seen pecking at the fly lodged in the fish’s mouth. They may regard that bluegill’s gyrations as an attempt to keep the tasty morsel from them.

As with most fishing situations there are many flies capable of producing catches of suspended bluegills.  If casting with sinking line, a small streamer is an excellent choice.  Any marabou-winged pattern is especially desirable due to the enhanced action.  Minnows are instinctively sought by bluegills.  These streamers should be tied on size-12 or -10 hooks.

For those using strike indicators or slip bobbers three fly types outperform all others: soft hackle patterns, small woolly buggers, and any fly with rubber hackle. All should be weighted. Again subtle action is the key to triggering strikes by suspended bluegills.  Since these presentations are normally beneath the depth of sunlight penetration, darker colors that present a stark silhouette are most easily seen by our quarry.  Soft hackle patterns with black, purple, claret, or olive bodies and dark hackle work best in size 12.  Dark-colored woolly buggers in size 14 or 12 featuring marabou tails shortened to no more than the length of the fly body in order to prevent short strikes offer good results.  Similarly sized rubber hackled flies that incorporate the same dark-colored materials are excellent as well.

Too often bluegill fishermen search the shallows to the exclusion of all other options.  They fail to consider the conditions facing their target species.  Taking seasonal needs and the adverse effect of sunlight penetration into consideration will enable fly fishers to adapt their presentations to match the prevailing conditions and experience the joy of catching more large bluegills more often.