A Guide To Locating and Catching Winter Bluegills 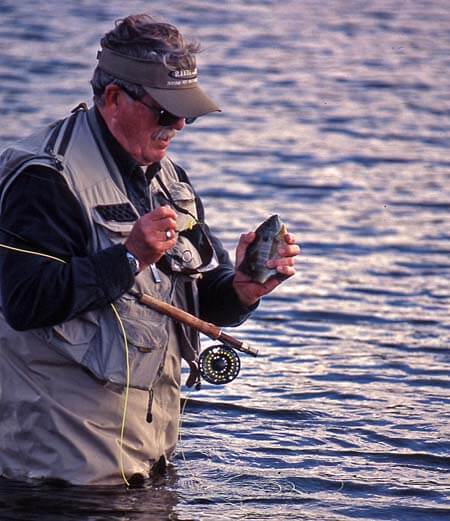 Bluegill fishing is synonymous with warm spring days and sultry summer evenings, not conditions that produce ice in the guides of your fly rod. But there are fish to be caught when the weather turns frosty. When woolen stocking caps, insulated coveralls, and a thermos of steaming coffee are necessary accessories, bluegills may well be warmwater’s best bet.

In late autumn when water temperatures begin to dip below 50 degrees, bluegills leave the shallows. The first stop in their transition to wintering locations is the first breakline, which is often the deepest edge of the weedline. As water temperatures plummet, aquatic weeds begin a state of decline, but they still serve the needs of the fish by providing protective cover for bluegills and their prey. This first breakline may be in water from 4 feet to 15 feet deep.  Bluegills may spend from several days to several weeks in this transitional location, and they are usually in a positive feeding mood as the need to build reserves for the cold times ahead remains strong. Heavily weighted flies and sink-tip or full-sink lines will be necessary to get and keep your offering in the fish zone.

Small streamers up to 1 ½ inches long that feature lots of silver and white are often the ticket to success. Allow the fly to sink to the desired depth, then retrieve it using either slow strips or a hand-twist retrieve. On larger bodies of water, trolling or controlled drifting can be the best method of locating pods of feeding fish. The bluegills can be located at any depth along a weed bank. Water temperature, sunlight penetration, and available food sources will help to determine the exact location.  In this situation a good fish finder will be valuable in staying on the weedline’s edge. Crustaceans and insects will still be active during this time, so small crayfish imitations and nymph patterns will be most successful.

As the water temperature continues to drop, nutrients and sediments that suspend in summer sink to the bottom and the water becomes clearer.  Light-colored flies become more visible, and patterns that contain reflective materials such as Flashabou, Krystal Flash, or tinsel chenille do a good job of getting the attention of the fish.

By the time the water temperatures reach 42 degrees, a bluegill’s metabolism will be noticeably reduced.  Lower temperatures prompt yet another move, this time to wintering areas.  Nearly always these fish will school tightly and suspend.  Often suspended fish will relate horizontally to a piece of structure and, although their location will constantly change, they won’t move very far from a favored area.

While schools of summer bluegills can be spread over a large area, this is not the case for winter bluegills which tend to be much more tightly grouped.  This behavior may make finding the fish more difficult because the area they occupy is smaller. On larger waters, a fish finder can shorten the search considerably.  But even with the aid of electronics it’s never a good idea to wander about aimlessly.  It’s a good bet that the bluegills haven’t gone far. The mouths of coves, the bases of steep bluffs, and the deepest edge of a dock would be good places to start.

If the lake has deadfalls that protrude into deeper water, wintering bluegills will often suspend over extended branches or in open water off the ends of dead trees. In reservoirs that have coves full of standing timber, it’s a sure bet that coldwater bluegills will suspend in the limbs, but the problem then becomes finding the few trees that bluegills have chosen as their winter addresses. Look for trees that appear to have a wide spread of submerged branches, and check out the ones that jut out from the rest to form a point.  Lake maps that show old creek channels can be helpful in determining which trees are the most logical candidates for harboring bluegills.  Remember that the fish are moving from shallow areas to these deeper locations and they will use the creek channels for travel.  Their progress will lead them from the shallow flats to the nearest “point tree,” then they’ll move progressively along that path toward deeper water.

Once bluegills are located, the battle is but half won.  Remember that these cold-blooded creatures have been slowed considerably by falling water temperatures, so few of these fish will be actively feeding.  In this condition of reduced movement, their appetites don’t approach the voracious levels of summer. This means that the angler’s window of opportunity is comparatively small but the good news is that, down to water temperatures of about 38 degrees, there will be a significant portion of the school interested in feeding at any given time. If we can hook and fight one of those fish amongst its brethren, others will likely become interested and shake off their lethargy to become active feeders. The hooked fish, swimming actively with food visible in its mouth, will serve to pique the interest of other nearby fish.

Retrieves should be extremely slow and interrupted by long pauses.  Even when trolling to locate a school, your motor should be used only intermittently. Even drifting with a mild breeze can be too fast for this kind of presentation. In standing timber or where other obstructions interfere with the retrieve, fishing becomes more of a vertical jigging operation.  Full-sinking lines and heavy flies are the order of the day.  Maintain contact with the fly as it is raised and lowered through the water column because hits in cold water are usually quite soft and strike detection can be difficult. Jig the fly slowly in one spot for up to a minute, then move only slightly along the same structure before repeating the process. These coldwater fish won’t move far to grab the fly, but they may well have become interested. When you feel a take, drop the rod tip slightly before gently raising the rod to set the hook.  In warm water bluegills can reject a fly quicker than a hiccup, but these lethargic bream aren’t nearly as fast.

Our experience has shown that bluegills tend to suspend in shallower water in small ponds.  On sunny winter days the fish will often be suspended over dark mud bottoms that absorb the most sunlight and in turn raise the water temperature a degree or two.

This year, extend your warmwater season well into winter.  Solitude is sure to be a side benefit of the outing.  The most satisfying fishing of the entire year awaits and catching a bunch of wintertime bluegills will warm your spirits.