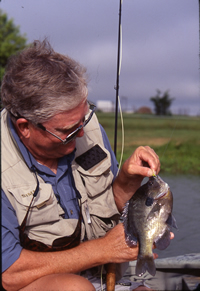 Terry is past President of the Missouri Outdoor Communicators, the state’s professional outdoor writers’ association, and past President of the Tri-Lakes Fly Fishers.
The Wilsons are ProStaff members of Sage, Redington, and Rio. They are happy to answer your questions about the products of these fine companies. Email them through this website anytime and they’ll help you find the right rod, reel, line, leader, or tippet to fit your needs.

Terry’s original flies for bluegills, largemouth bass, and smallmouth bass have been featured in Fly Fishing and Tying Journal and Fly Fish America and were included in the Federation of Flyfishers Fly Pattern Encyclopedia and Innovative Flies and Techniques. Roxanne’s photos appear in their magazine articles, books, and slide shows.

They are the recipients of the 2017 Dr. James Henshall Award presented by Fly Fishers International for their many contributions to warmwater fly fishing. They were awarded the Southern Council Federation of Fly Fishers Educators of the year in 2014.

They are active life members of the Federation of Fly Fishers, and members of the Missouri Smallmouth Alliance. In addition, they are members of Pacific Fly Group’s Fly Tyers, and their original patterns are distributed by Orvis.