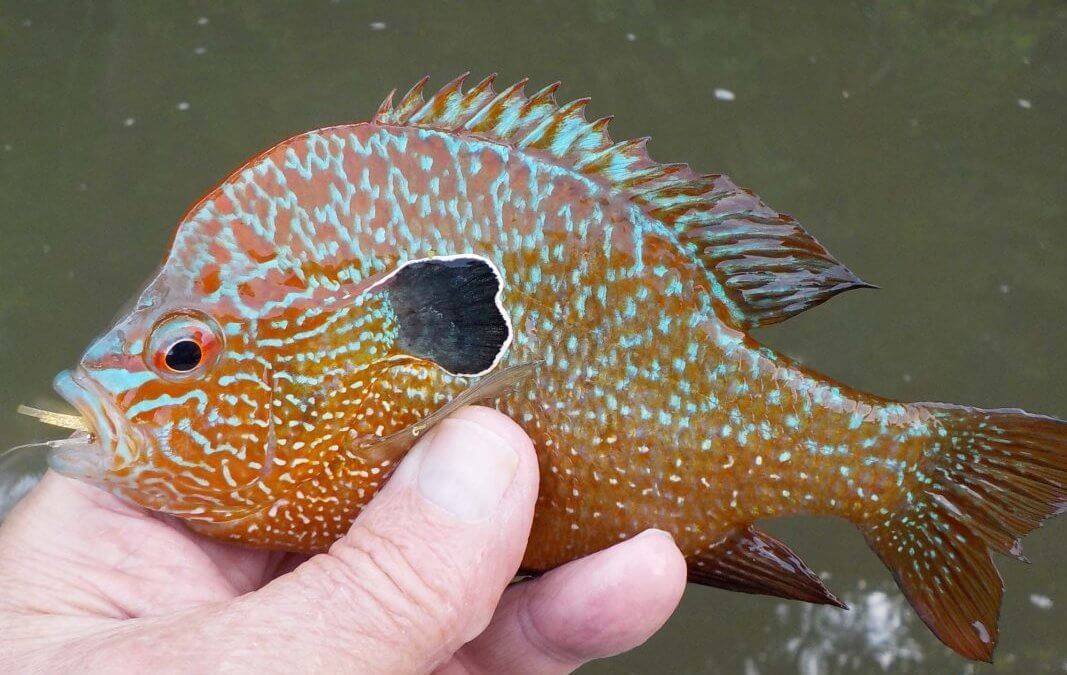 A  Kingfisher clattered its annoyance as I stepped into the clear waters of a favorite stretch of river. I hoped to encounter some aggressive sunfish and possibly some smallmouth bass while casting my 8½-foot 3wt. Several rises convinced me to knot a Sponge Spider to the 4X tippet. A fourth cast delivered to the back of a slow eddy initiated an aggressive attack.  Flashes of bright orange indicated that a Longear Sunfish had inhaled the bug. A dozen more of this beautiful species were captured and released before the sound of a splashy eruption in mid-stream caught my attention. Casts to the diminishing rings of the rise were ignored, and my efforts re-focused on the sunfish. Minutes later, the mid-river disruption re-occurred. I waded ashore and crept behind elevated shoreline bushes hoping to observe the fish. It didn’t take long. A foot-long bronzeback rose from submerged rocks to ambush a school of minnows that, in their panic, sprayed into the air as the bass slashed through them. The Sponge Spider was quickly replaced by a silver/white Mini Minnie, which was cast to the side of the rock pile and allowed to sink to the bottom before being retrieved in strips of increasing speed. The first two passes were fruitless, but the next cast brought an aggressive take. The resulting hookset put a throbbing bend in the light rod. Five leaps and a few bulldogging runs later, and the bass was lipped, admired, and released as darkness engulfed the pool.