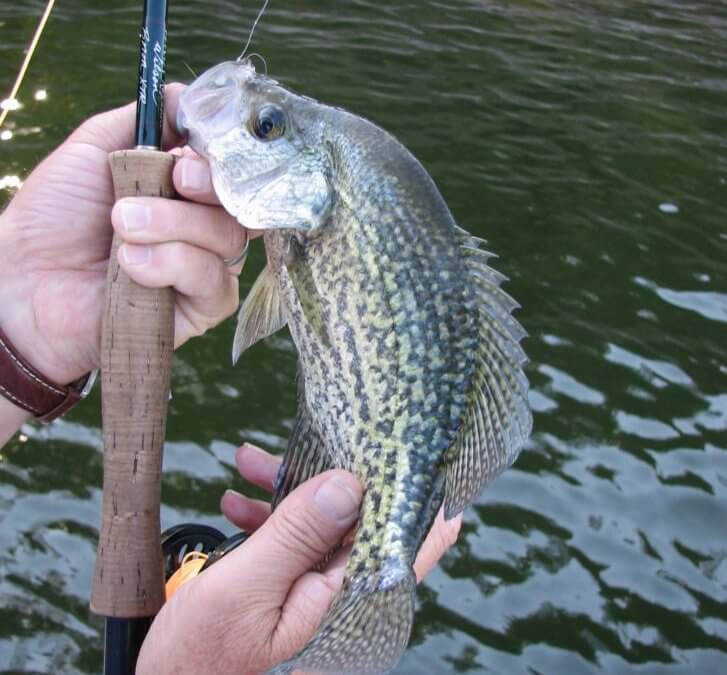 After the Rains: Back To Business

One of my favorite stream sections empties into a large reservoir three miles away. Weeks of river flooding delayed trips there and apparently altered the migration habits of some species. Initially, hopeful of encountering bass, I cast some large streamers without success before deciding to target the bluegill population. I expected to locate them among the branches of deadfalls and entice them with a Brim Reaper. Once again I was wrong. The flies were counted down into the branches and aggressively attacked by crappies. In thirty minutes of casting 11 slab-sized fish my Louisiana friends call “sac-a-lait” (which roughly translates to “sack of milk”) were wrenched from the structure before the action slowed. My move downstream to a similar location rekindled the action and 12 more of similar size were brought to hand and released. The crappies were all 3 1/2 to 4 feet deep and most inhaled the Brim Reaper as it was dropping vertically into their lairs. Line-watching for that telltale lurch or hesitation was imperative for a positive hookup. As darkness approached one of those “last casts” was hit immediately upon splashdown. It was a complete surprise that revealed the fly had been intercepted by a10-inch smallmouth bass. I drove home as a big, full, orange moon rose in the Eastern sky. 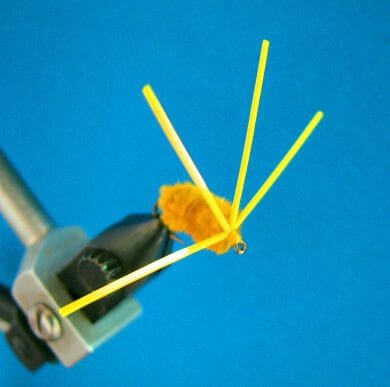 Best Fight Of the Season

Intense heat accompanied a wet-wading trip to a favorite smallmouth stream. A huge gravel bar near the bridge access hosted sunbathers and swimmers that I bypassed to wade downstream. My 5-weight propelled a yellow Bully Spider toward the rocky shoreline. The third cast brought a violent strike that led to a stubborn fight that included two tail-walking leaps. The bronze beauty was admired and released before I made another cast back into the same rock pile. The first line strip came to an abrupt stop and the line began moving sideways. A second hookset turned the heavyweight toward the rod before reversing course and slowly but steadily diving into the pool’s deepest water. I wondered aloud if I had hooked a large catfish. I was mindful that my 4X tippet was strained to its limit, but I had to continue pressuring the “behemoth” if I was ever to get a look at it. The tug of war continued for several minutes until it began swimming toward me. My first clue to its identity was the sight of a huge shadowy figure that seemed to pulsate as it both powered and glided along its chosen path. Finally, it came into full view. It was a turtle with a shell that was easily two feet in diameter!?! I made the immediate decision to donate the fly to the turtle by executing a “long-distance release.” 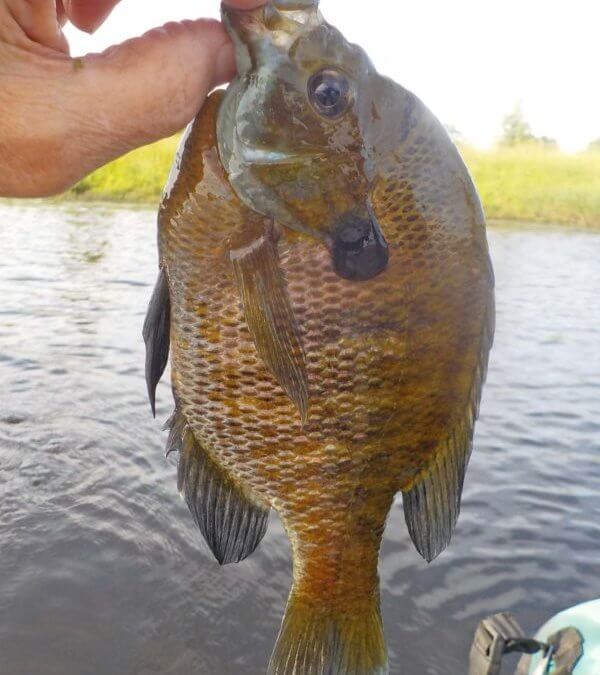 Last week a warm, humid evening was adjusted to comfortable by float tubing a large pond renowned for producing big bluegills. Several 7-inch bluegills and an undersized crappie were caught and released before a yellow sponge spider landed in the shade of a backside willow. A short strip was greeted by an explosive strike and a deeply bent 4-wt. rod. When the fish’s initial lunge for shoreline branches was rebuffed it dove for the pond’s deepest water and towed the tube along a circular rod-throbbing path. Finally, the fight descended into the customary tightly wound circles before being lifted onto the apron of the float tube where it was measured at 9-3/4 inches. The release was more difficult than usual because I could not get my hand around it. It was a “two-handed” bluegill! Many other fish were caught and released including a 16-inch largemouth bass but the memory of that nearly 10-inch bluegill remains. 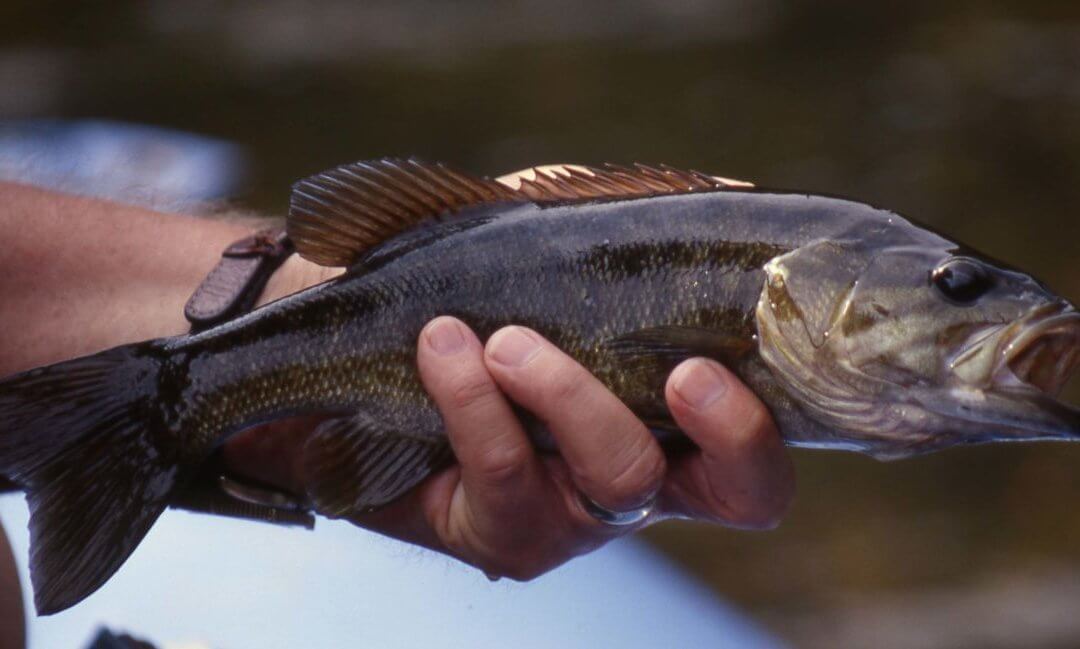 On Being an Opportunist

Revisiting an evening’s trip this week I enjoyed using a very productive pattern of mine. Here’s the recap: A deadfall interrupts a rocky shoreline on one of my favorite streams. A 5-weight rod delivered weedless streamers to the deep edge of the extended tree branches as slow-sinking intermediate line enabled it to remain unaffected by the wind-blown surface water. The first line strip stopped abruptly. I answered with a firm strip-set that resulted in a throbbing rod tip. Three head-shaking leaps and several dogged attempts to reach the wood structure later an 11-inch bronzeback was admired and released. Two more similarly-sized smallies and 7 green sunfish came to hand before the action slowed. On the hike back to the bridge access I encountered a quiet pool and noticed several small pygmy toads hopping across the gravel bar. I quickly switched reel spools to accommodate a floating line with our Diving Frog attached to the 3X tippet and cast to an exposed rock pile. The sponge-bodied frog floated until divining with wildly kicking legs when the line was stripped. A release of the line tension allowed the frog to float back to the surface where it was often greeted by an explosive strike. Four more smallmouths were landed and released including an evening’s best of 13 inches. 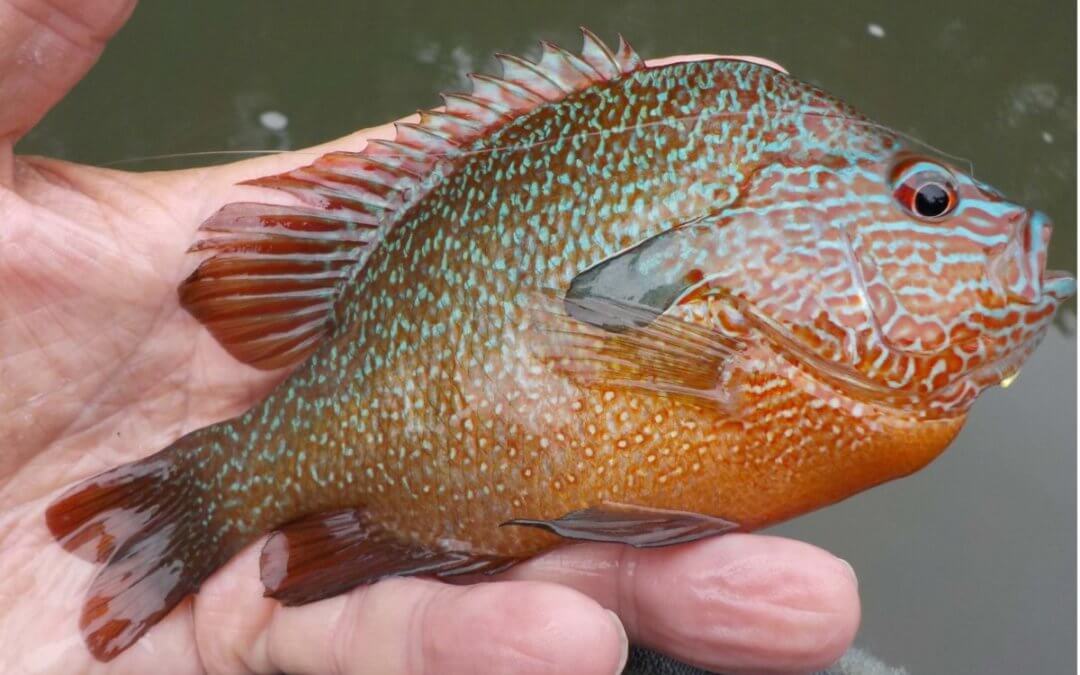 A summer late-afternoon wade trip to one of my favorite streams produced an unexpected surprise. The search for smallmouth bass was abandoned after I was distracted by fish activity on a shallow inside bend. Brightly-colored male Longear Sunfish, often misidentified as “pumpkinseeds,” were busy building and defending their nests. Streamers were replaced by black Brim Reapers which were cast to the extreme outer edges of the activity. The longears’ bright orange breasts are flecked with turquoise and they must be considered among nature’s most beautiful fish. Most casts resulted in a hookup and spirited fight before each was released into the deeper pool behind me. As the fish became more curious the action slowed and I waded further upstream to the next spawning site. I lost count of the catch but each brought a smile. 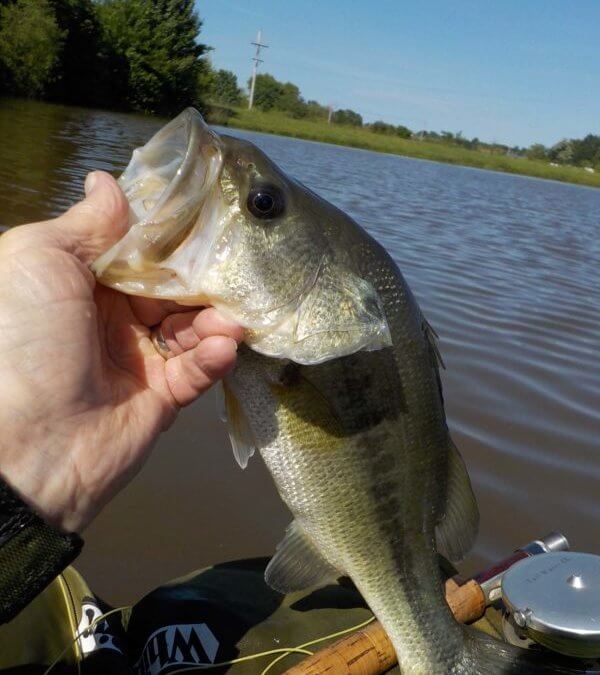 Earlier this week I float-tubed a small pond with great success. Shaded deadfalls held aggressive bass to 15 inches while shoreline weed beds delivered bug bluegills with three measuring a robust 9 inches. All were caught and released on a size-10 chartreuse sponge spider. Anxious for a repeat performance I returned two days later with the same equipment and tactics but quickly discovered the mood of the fish had drastically changed. Those few that remained near the same structure refused to chase after a meal. Either my offerings were refused altogether or were indifferently hit if no energy expenditure was necessary on their part. The sizes of the caught fish were also much smaller. The only discernible difference was that a persistent east wind which indicated a change in barometric pressure was in play. So, do I plan to avoid fishing east winds? Of course not, I go fishing whenever I can!