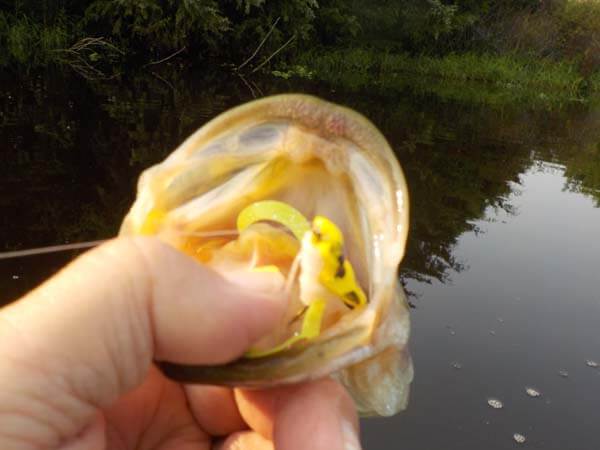 Our footsteps startled a young bullfrog that dove into the water from his perch in the pond-side muck.  Its leg kicks were visible in the clear water, but after only a couple of strokes it resurfaced. At that instant two huge largemouth bass lunged for the prey and the frog disappeared in a violent wave of white foam. It wasn’t clear which bass had devoured the much prized meal but our conclusion was inescapable: we had to be able to duplicate the looks and action of that frog.

Motivated by the size of those two bass and the ferocity of their aggression, we recognized that we needed a frog pattern that floated reliably, dove when retrieved with leg-kicking action, and returned to the surface when line tension is released. We also wanted a durable fly that could survive smashing strikes, and the fly had to be weedless without sacrificing its hooking ability. After settling on the design
our ideas took shape at the tying vice. We experimented, made modifications, and when we were finally satisfied we sent some to fly fishing friends in various parts of the country for field testing. The opinions of the testers were unanimously positive. Bully’s Diving Frog was taking largemouths, smallmouths, Kentucky Spotted, and Rock Bass nationwide.

Fishing this high-floating, leg-kicking pattern is easy, but a couple of refinements could increase your success. The small sized Bully’s Diving Frog can be cast on a 3-weight flyrod but you’ll be better served by a 5 to 8 weight to winch the big ones away from cover. The larger version is best presented on 7- to 9- weight rods.

When the frog lands near weeds, brush, docks, downed trees or similar structure, lower the rod tip and remove all slack line. A firm strip will cause the fly to submerge and as tension is relaxed it will return to the surface. Next, hang on to your rod because that’s when the “bass attack” occurs. Repeat the process until picking up to re-cast. Don’t worry about hanging up on structure because the special double monofilament weed guard works better than most. Note that the weedguard is crossed under the hook eye. This innovation is the creation of southern Louisiana-based master fly tier Marc Pinsel. The crossed mono forces the two strands apart which enables the fly to be weedless, yet when the fish strikes the pressure of its jaws spreads the two pieces of mono further apart exposing the hook point which allows a much surer hookset. We call this weedguard refinement the “Pinsel Twist”.

One retrieve that has produced great results is the “double pump.” Its explanation should be prefaced by acknowledging that virtually all experts advise against using rod tip manipulations to activate the fly. We respectfully disagree. Moving the rod tip creates slack line, but it is easily and quickly recovered by stripping, while the fly’s action is unquestionably enhanced. We use it consistently on both surface and submerged presentations. The double pump is accomplished by moving the rod tip slightly to the side, stripping the fly under the surface, quickly removing the slack line, then repeating the process before stripping again. This action makes Bully’s Diving Frog appear suddenly aware of its predator, which imitates a frog making every effort to execute a desperate escape. This triggers the attack instinct in ambush-predator species.

Another presentation involves subtle action imparted in or near tight structure like a pocket in a weedline. With very little room to execute a dive keeping the frog in the confines of the enclosed pocket is necessary. Wiggling the rod tip from side-to-side (another slack creating maneuver) causes the frog to send out small ripples without moving forward very far. The flexible legs move just enough to give the impression of life yet maintain the appearance of vulnerability.

Bully’s Diving Frog is tied on a wide-gap bass hook (TMC 8089). The size-10 version has a body length of 1¼ inches (not including its legs), while the size 2 model has a body length of 1¾ inches with larger legs and eyes. Tippets of 3x to 1x are best used on the size 10-fly but tippets of 12- to 16-pound test are most effective for size 2. Those tippets are not only capable of efficiently turning over the flies but also are able to withstand abrasive contact with structure. Leaders of 6 to 7½ feet are adequate for both sizes. We tie the frogs in 3 colors: olive, tan, and yellow. All have black spots and white bellies. The olive and
tan models replicate most freshwater frog species while the yellow version is most clearly visible to the fisherman even in heavily shaded areas or under low light conditions. Originally we used only olive and tan foam to tie the frogs but quickly recognized the advantage of maintaining visual contact with our imposters. We have done equally well with each of the colors. We’ve used yellow eyes on the olive and tan models but for contrast have chosen red eyes for the yellow versions of the frog.

The bulky bodies of Bully’s Diving Frogs enable them to land on the water with a “splat”. While normally this heavy splashdown is an ill-advised approach, it mimics the landing of a frog that has hopped into the water and thus enhances its ability to attract the attention of the bass population.

From late spring until mid-autumn bass populations in both still and moving water actively prey on frogs because they are easily captured and offer a satisfying meal. Target shaded areas of structure or fish them during periods of low light. In the heat of mid-summer early morning will be most productive because the water cools most substantially in the overnight hours without the sunlight’s warmth. The fly is also very effective during “magic time,” the brief period in the evening after sundown just before dark.

If catching surface feeding bass appeals to you Bully’s Diving Frog is tied with you in mind. An assortment of colors and sizes will enhance your opportunities to catch the largest bass of your life.When you win that epic battle sharing the picture of your conquest with us will be much appreciated.