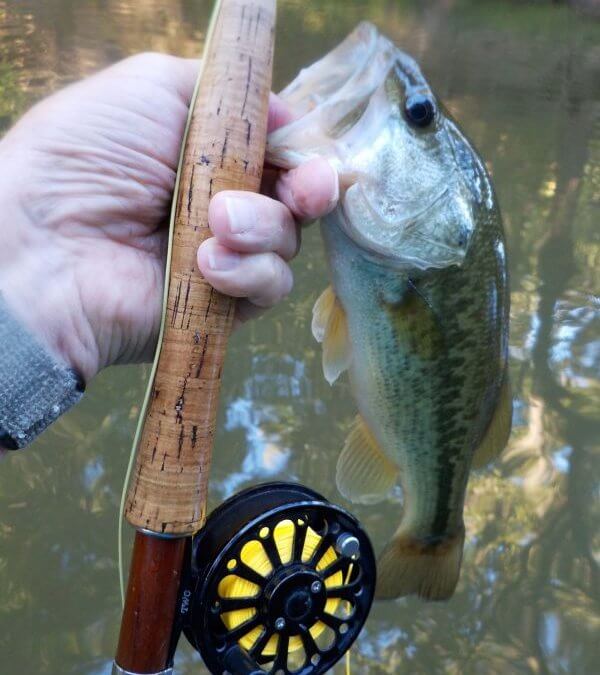 It’s my good fortune to have “double-header” rivers nearby. These are streams fed by large springs that are cool enough to support trout, while other sections of the same rivers host a variety of warmwater species. Most anglers are attracted to the trout water, while I prefer pursuing several sunfish species, crappie, and bass to include largemouth, smallmouth, and rock bass in the more temperate sections. A 5-wt. rod and a reel spooled with slow-sinking intermediate line accompanied a hike across an over-grown pasture to a rocky pool with a gravel bottom. I theorized that the rapidly cooling water would invigorate the appetites of the bass population into seeking a substantial meal. I knotted a size-8 olive/copper Mini Minnie streamer to a 3X tippet, so down-and-across coasts enabled the fly to sink among the rocks before I stripped it toward the rod. I expected smallmouth bass had located just downstream of the rocks, but it appeared that they were not. Frustrated, I continued to wade downstream and finally came to a pool fed by a four-foot-wide spring branch. The first strip of the streamer was met by a firm tug that elicited a bent-rod hook-set, and eventually I landed a 13-inch largemouth. Nine more fish (Green Sunfish and Rock Bass) were brought to hand in that one location. Summer’s cool spring water had become late autumn’s warm water.