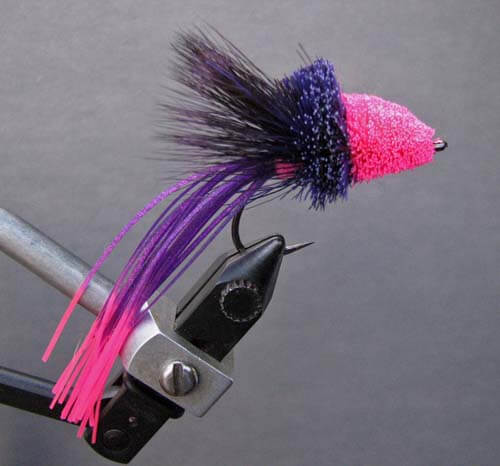 A Great Blue Heron squawked in annoyance as it took flight, prompting the sun-bathing turtles to slide from their deadfall perch into the still pond. I maneuvered my float tube into the shade of bankside willows, and the 8-weight rod sent a purple/pink size-2 Hula-Diver into the branch-infested shallows. When the splashdown ripples faded, a firm strip sent the fly a few inches under water as the Sili-Legs tail wiggled seductively. I released my line tension, and the buoyant deer hair body returned the colorful lure to the surface with the flexible legs still gyrating. The fly’s return to the surface on the third cast was greeted with a violent moss-tossing explosion. The Largemouth Bass thrashed across the surface in 3 successive leaps before plunging into the pond’s deepest water to create a head-shaking stalemate. Finally, one last attempted jump indicated the bass was spent, and I led it to hand. The 16-inch fish was the day’s best, but I captured 14 other 10- to 15-inchers. One that was suspected to be larger was long-distance released.