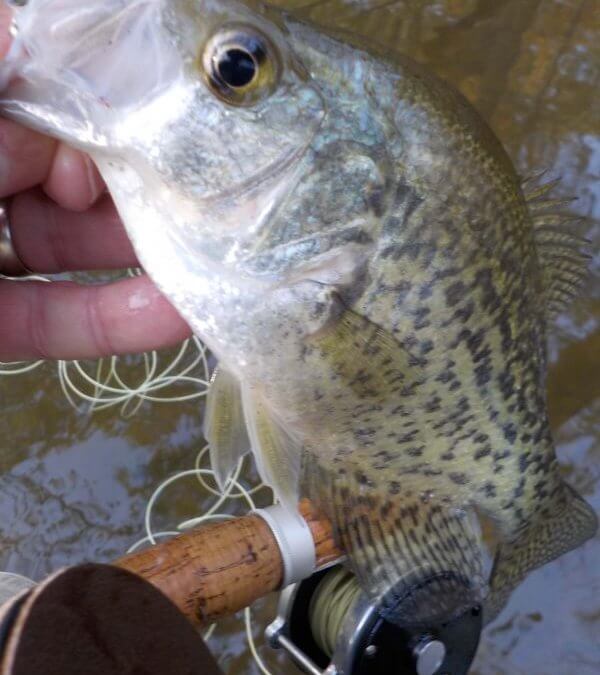 The receding river water finally allowed a downstream wade to a series of deadfalls. My arrival provoked a Red Wing Blackbird to assault me with a raspy-throated tongue-lashing for the intrusion. This pool is my favorite place to intercept crappies intent upon migrating from the reservoir to spawn. Repeated cold fronts, including a 3-inch snowfall only ten days before, had postponed the process. Finally, the water had warmed to 65-degrees which offered a promising opportunity for both the crappies and my proposed efforts.  I chose a 4-wt rod, a reel spooled with an intermediate sinking line, and a 7½-foot leader with 4X tippet to deliver a size-6 Crappie Bully to the edge of the entanglements. The countdown of my initial cast was interrupted, and a quick strip-set revealed a strong fish that put a deep bow in my light rod and a smile on my face. The scene was repeated 21 times before the calls of a pair of Barred Owls reminded me to retreat. Each rod-bouncing battle seemed to excite the remaining population into attacking my offerings with increased vigor. Even two fish that pulled free and escaped didn’t slow the action. Most of the crappies were 9 to 11 inches in length, with a few smaller and a couple that were larger. As John Gierach said, “Just another lousy day in paradise.”