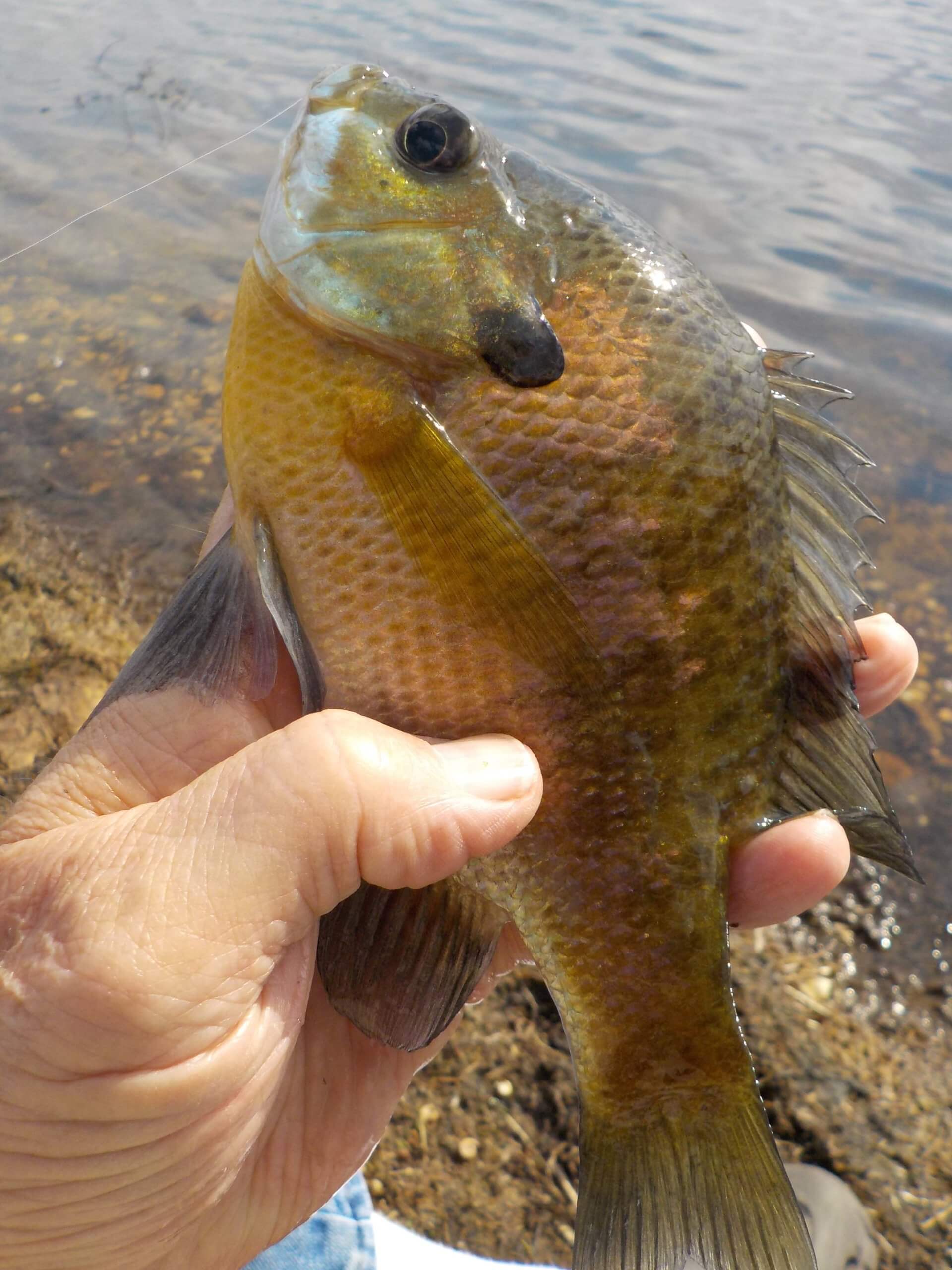 Minus the customary telephone greeting, an excited voice pleaded, “The big bass are suicidal! Get down here right away!”  Six hours of post-midnight driving led to expectant casting, but as the sun rose above the trees our enthusiasm evaporated with the morning mist. Downsizing the streamers that had been magical the day before turned around the fishing as monster bluegills, with their twisting, diving tugs, swept away the gloom of failure. We caught easily a hundred apiece, and in the process we were again reminded why we love bluegills: they are just so much fun.

In our first book, Bluegill Fly Fishing & Flies, we arbitrarily established a length of 8 inches to designate the point at which a bluegill is considered “large.”  Linear growth after that is relatively slow as the species’ thickness and depth become more pronounced.  A 9-inch bluegill, therefore, is substantially larger than a fish but one inch shorter.

Despite their beauty and admirable fighting ability all bluegills, including the world record at 4 pounds 12 ounces, have relatively small mouths.  That fact likely convinces most anglers that the species does not actively target the local minnow populations.  In reality, minnows provide readily available meals and big bluegills regularly pursue the most vulnerable.  Still, we must recognize that the small-mouthed bluegill is limited to tiny minnows and our flies must be sized accordingly.

Practical hook sizes for bluegills range from 12 to 6.  That obviously doesn’t mean that these feisty fish won’t attack much larger flies.  Most warmwater fly fishers have had the experience of catching bluegills on their largest bass flies.  Yet that speaks more of the tenacity of our quarry than to flies sized for consistent success.  Appropriately sized Tiemco 200R or Mustad 9672 hooks enable tying streamer patterns that are easily cast with the light rods preferred by bluegill lovers.  Fly fishers need to be able to present their streamers to depths in the water column from just below the surface to 10-feet or more.  Two spools of lines solve the problem: one spool of weight-forward floating line and another with sink-tip or full-sinking line.  Leaders of 4 to 9 feet tapered to 5X tippet handle most bluegill fishing circumstances.  In weedy environments a tapered leader, as opposed to a knotted one, will prevent having to wipe vegetation from the leader after every retrieve.  Short leaders of 4 feet are practical when fishing unweighted streamers on sink-tip or full-sinking lines so the fly will not bow back toward the surface, which might render it ineffective.  Lengthening the leader with weighted flies enables presenting flies to deeper water.

Flies with complex recipes that require a lot of time to tie or are composed of expensive materials just don’t make sense because bluegills are primarily structure oriented.  Submerged tree branches, stumps, weedlines, and brush will inevitably consume some flies.  If the angler is hesitant to cast right into the heaviest cover for fear of losing flies, few jumbo bluegills will be caught.

Our favorite bluegill streamer is one of our own creations we call “Wilson’s Mini Minnie.”  Here’s our recipe:

Wings: White marabou extending a little beyond the hook bend

Other patterns, such as a Black Nosed Dace or a Woolly Bugger, tied in similar sizes can be equally successful.

Whether fishing natural lakes or impounded water, three locations top the list as big bluegill magnets.  The first is docks.  Docks serve cabin and home owners as safe and convenient boat tie-ups, swimming and sun bathing areas or fishing platforms.  Unfortunately, not all docks are created equal, but those located at the edge of relatively deep water will hold big bluegills during every season of the year.  It’s best to approach the prospective dock from deep water and cast the streamer near its deep edges.  Count the fly down to assure that you can return to that same depth.  Your countdown pace may differ from the next angler’s but that makes no difference as long as you are aware of the depth at which you are fishing.  When you have fished the outside edges move progressively shallower along the dock until the shallows have been thoroughly explored.  If large bluegills have been caught there make a mental note of the location as it will remain attractive to big bluegills.

Another equally productive type of structure is the deadfall.  Look for trees that have fallen into the water with their trunks on or near shore and branches extending into relatively deep water.  On bright, sunny days big bluegills will likely be located in the deepest branches while overcast skies may push them higher in the water column and closer to the branch tips.  The best approach is to fish the deepest end of the deadfall first and work toward the shallows so as not to spook fish by casting over them.

A third big bluegill location is the weedline.  Simply drifting along while casting toward the weeds wastes time.  Instead, look for areas of the weedline that are different.  Pockets in the weeds are worthy of attention but they can be difficult to target because there isn’t a great deal of room for fly manipulation.  Utilize the “vertical drop” of the fly to its full advantage.  A short, but accurate cast to the back of the weedline pocket with some slack line will allow the fly to drop vertically through the water mimicking a wounded minnow.  The angler can interrupt the fly’s fall periodically by lifting the rod, then lowering it to permit the fall to continue.  Often it’s this hesitation that triggers strikes.  Line-watching as the fly drops deeper is important.  Set the hook if any hesitation or twitch of the line is observed.

In addition to the vertical drop, three other streamer retrieves can be incorporated into the bluegill fly fisher’s repertoire.  First is the “strip, pause” retrieve.  Varying the speed and length of the strip will enable the fish to tell you which is most enticing.  Start by stripping slowly in 2-inch strips with lengthy pauses and increase the length of the strips only when it’s clear that the fly is being ignored.  Another productive retrieve is the “lift, lower, and strip” retrieve for weighted flies and/or sinking lines.  Instead of stripping to move the fly, simply remove all slack line; point the rod tip at the fly, then lift the rod tip 4 to 6 inches.  Lower the rod tip back to its original position and strip to remove the slack.  Repeating the process causes the fly to rise, then dive.  Again, line watching is important because the bluegills often strike the fly as it dives toward the bottom.  The “change-of-direction” retrieve can trigger strikes from reluctant bluegills.  Make a short cast on a  9-foot leader, count the fly down to the desired depth, make a mend to one side, add a couple of short strips, then mend in the opposite direction to cause the fly to change directions.  The fly appears to be a minnow taking evasive action that may heighten the bluegills’ interest.

Incorporating streamers of appropriate sizes; fishing docks, deadfalls, and weedline irregularities; utilizing the vertical drop; varying strips; the lift, lower, strip, and the change-of-direction retrieves will slant the odds of catching big bluegills in your favor.  Then, do all of us the favor of releasing those 8-inch and larger bluegills so they can continue to grow to increase the possibilities of creating trophy bluegill fisheries we can all enjoy.