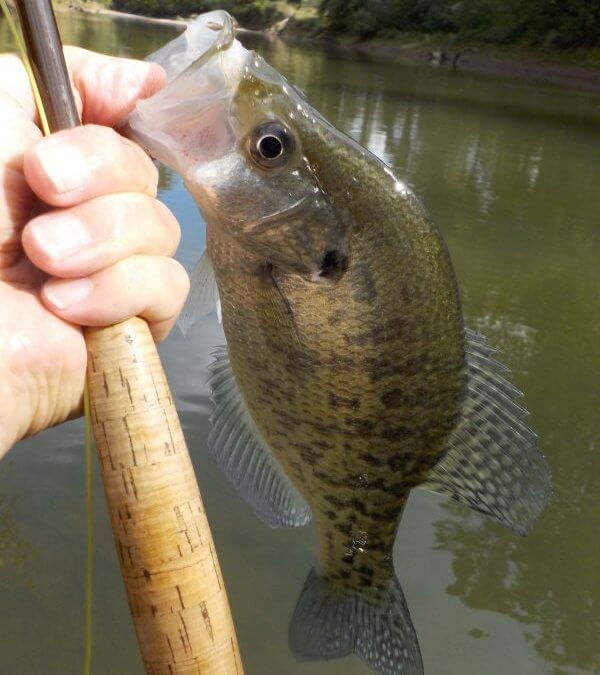 Crappie, or as my Louisiana friends prefer, sac-a-lait usually are not well suited to ponds. They are prolific spawners, and without a massive food supply and sizeable predator species, they tend to over-populate and stunted growth results.  Ponds that are the exception, however, are to be cherished. One of those big, deep crappie sweet spots is located just a short drive from my home. Even despite the late spring, I knew this would be a post-spawn trip and that locating my target species might not be easy. It was heavily over-cast in mid-afternoon when I began airing my float tube. A 6-wt. rod, a reel spooled with 3-4 i.p.s. (inches per second) full-sinking line, and a gold Squirrel-spin that could be trolled at various depths as a searching pattern accompanied my launch. Six trolling passes produced but one small bass and a possible hit that may have only been an encounter with submerged brush or limbs. After a long drink of iced tea from my on-board cold cup, I started the next pass by moving slower and employing a presentation with a “lift, drop, lift” action.  As I reached mid-pond, the dropping fly suddenly felt heavy. A swift rod lift revealed the fight of a broad-shouldered “Spec,” and the bouncing rod tip brought a smile. After two more crappies from the same location, I switched to a size-8 Crappie Bully, anchored my float tube, and enjoyed another hour of twisting battles before the action slowed and my ration of tea was exhausted.