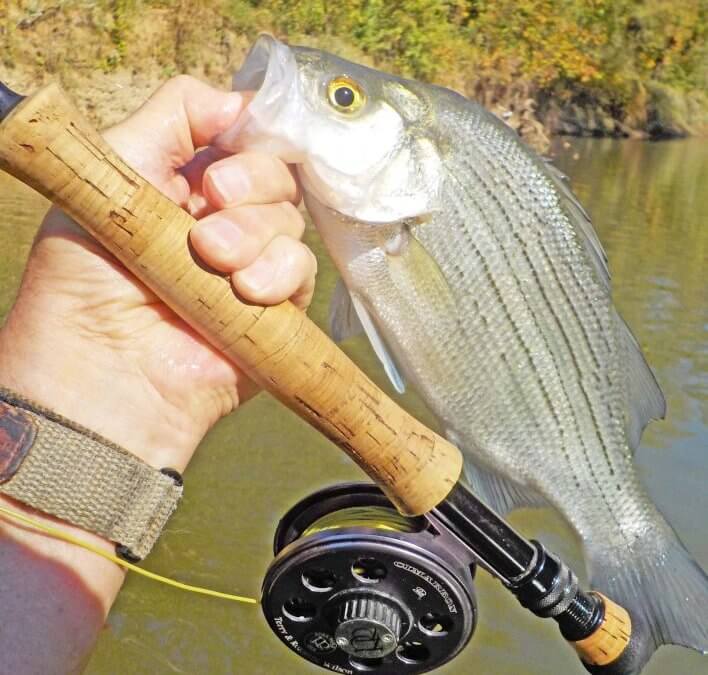 The sun danced among fluffy white clouds as I waded into the stream. The White Bass migrating from the nearby reservoir to spawn in the river were the target, but the fishing is shared with many others. The smashing strikes and wild, bull-dogging battles of these bass annually attract many anglers. Some fished from a wide variety of watercraft. Kayaks, canoes, and fully equipped bass boats are standard. Bank stalkers occupied most exposed gravel bars, and there were even a few clad in waders like myself. Bait casters and spin fishers dominated the crowd, but another couple of fly casters could be seen downstream. I found my favorite pool, a large eddy with a submerged brush pile unoccupied, and cast an olive/copper Mini Minnie, which replicates a small sunfish, on a 3 i.p.s. (inches per second) full-sinking line. A dozen retrieves were ignored before a solid hit put a deep rod-tip bouncing bend in my 7 wt. rod as the muscular fish headed into the deepest pool then switched tactics and sought the swiftest current before encircling my position and coming to hand. It was a 14-inch female swollen with eggs, and I quickly released her. Two dozen more White Bass were captured and released without moving to another location. About a third of the catch were females. Smaller males dominate the early portion of the season, but the larger females soon join them to create this unusual circus of fishing activity.